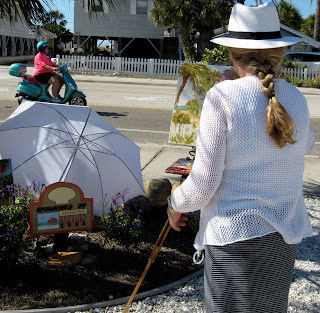 Helen Tilston painting en plein air at Indian Rocks Beach. I wish to take this opportunity to wish each of you a very Happy Christmas and every good wish in 2021. Every year, I donate three paintings to a charity.   One of the  charities that I have donated to over the years has been to Clearwater Free Clinic in Clearwater, Florida.  They provide health care to the uninsured.   Doctors and health care workers volunteer and they have very few payroll staff.   I was first asked to donate (which is an honour and one's work must be juried in) about fifteen years ago. The featured artist that year was Sophie Matisse the great grand-daughter of Henri Matisse.  (Pictured below) Mary Rose Holmes, Helen Tilston and Sophie Matisse Fast forward to five years later and we were asked to be the featured artists (my art partners Mary Rose Holmes and Violetta). My painting for this year is "A Mother's Love" painted, in Ireland, during lockdown. The Martini + Matisse Gala will take
Post a Comment
Read more

New Paintings hot off the easel 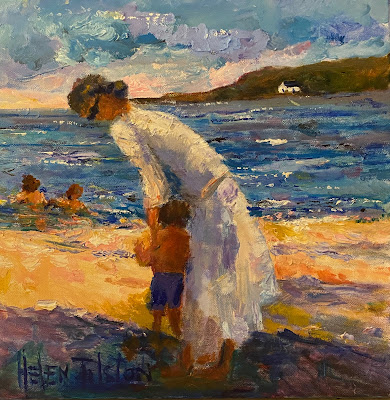 A documentary film "Save Our Cottages" 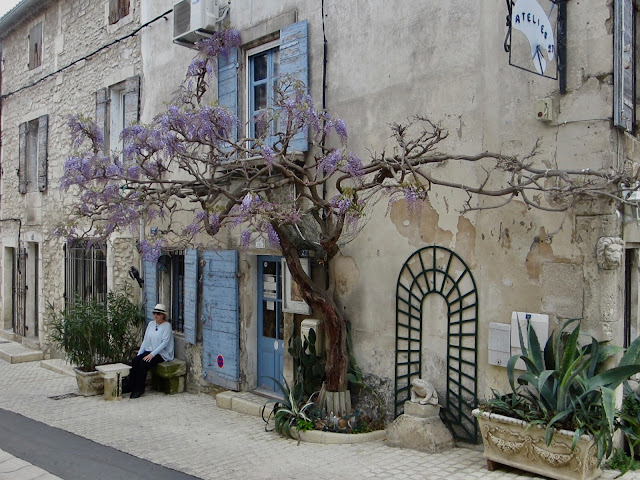 Helen Tilston, St. Remy-de-Provence, France. Photo Michael Tilston I have just returned from Provence, France where my work took me to research painting and filming venues for  Save Our Cottages:  Artists with a cause, a documentary to be aired on PBS in 2018. Violetta Chandler and Mary Rose Holmes Painting and  at Indian Rocks Beach, Photo Tricia Priest Emmy Award winning documentary film-making team Lynn Marvin Dingfelder and Larry Wiezycki have been filming The Plein Aire Cottage Artists, Violetta Chandler, Mary Rose Holmes and Helen Tilston for the past several months at Indian Rocks Beach, Florida Violetta Chandler & mary Rose Holmes  Photo:  Helen Tilston The second part of the documentary is scheduled for filming in Provence at the beginning of June. We are going to be painting and walking in the footsteps of the fathers of Impressionism in Provence. We are thrilled that this documentary is going to film and will be aired on PBS in 2018.
13 comments
Read more 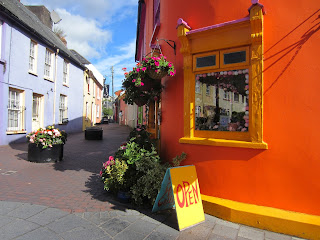 Kinsale Ireland Photo Helen Tilston Where has summer gone? We thoroughly enjoyed the work involved in judging The Arts & Letters Club, Washington D.C. scholarship.    A challenging experience and we ere happy to call upon our previous experience of judging the Plein Air Paint Out in Tarpon Springs some years back. All three of us have been working on commissioned pieces this summer.   Additonally, we are painting furiously and  adding to our upcoming exhibition at Indian Rocks Beach in December.  Giving back to our community is important for us and this year the Plein Aire Cottage Artists are donating this painting by Mary Rose Holmes to the annual Octoberfest at Indian Rocks Beach, Florida Mary Rose Holmes painting at 8th Ave and Gulf Blvd. Indian Rocks Beach Mary Rose Holmes adds magic to painting in studio.   Violetta Chandler has generously agreed to donate a portrait to a worthy cause that provides health care to those without. The painting will be p
5 comments
Read more 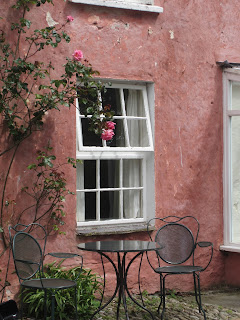 Photo by Helen Tilston  The phone rang recently and the Speaker asked to speak to the three members of the Plein Aire Cottage Artists;  Violetta Chandler, Mary Rose Holmes and Helen Tilston. They declared that they have been following our artist journey and congratulated us on our work and recent commissioned pieces.   We listened cautiously.    It was then revealed that they had selected us to be the Judges of one of the most prestigious scholarships in the USA for 2016.   The scholarship is open to young artists across the entire country.   For the past month, we have been burning the mid-night oil and more than once saw the sunrise. Some of the pieces of art work submitted took our breath away.   It is at a time like this where we are so pleased to have three of us to collaborate.    We take this responsibility with the uttermost care and detail.   We bear in mind the amount of work and care put into each applicant's portfolio.  Having made this journey ourselves we ho
7 comments
Read more 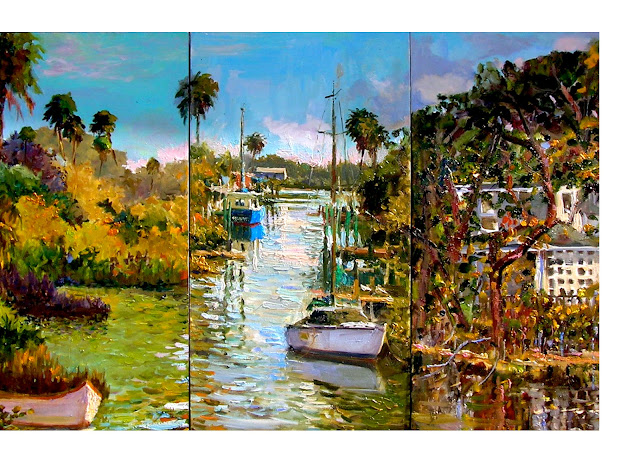 Historic Yacht Basin, IRB, Fl. Original oil painted on canvas one panel by each artist:  Mary Rose, Violetta & Helen Tilston Hope everyone had a wonderful summer and that you are fully rested to take on the world of Autumn and Winter. The Plein Aire Cottage Artists have had one of their busiest and most successful Summer.  Pictured above is Violetta painting at Ballycotton, Co Cork,  Ireland, in June.    Ireland has welcomed our paintings.   One comment from an onlooker was "It looks like ye paint the sunlight in the painting" Mary Rose and Violetta adding magic to plein air paintings Four local newspapers covered our shows.  Cry Radio Station in Youghal invited Helen Tilston to Sixty Minutes for a one hour interview and a promise of a return visit prior to Christmas. Technical Asst. Reese Denehy at CRY Youghal Suzanne Dillon Radio Host at CRY Youghal Helen Tilston awaiting interview at CRY Station Youghal Pat Carroll  Host of Sixty
2 comments
Read more 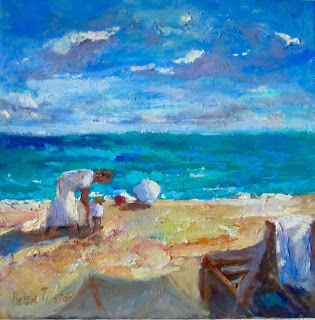 A Mother's love, by Helen Tilston One of my favourite restaurants in Ireland is Aherne's, located in the Historic Walled port of Youghal (Old Town Walls, built in 12th century are still intact) is one of Ireland's Heritage Towns and is seeped in history.  Sir Walter Raleigh was Mayor of this town.  Myrtle Grove his home is worth visiting. When Katie Fitzgibbon, owner of Aherne's asked if we would exhibit our paintings in their dining room we were thrilled to be associated with this fine establishment. Coastal Living Series 19 is now at Aherne's. Should your travels take you to Ireland, Aherne's is a must.   Evening at Ballycotton by Violetta Summer's Dream by Mary Rose Holmes www.ahernes.net Open turf fires and warmest of  welcomes await you in this family run hotel in historic walled port of Youghal.  Rooms are comfortable and luxurious, decorated with antiques and original art work. Their famous seafood bar and restaurant special
5 comments
Read more
More posts